Finding the Right Pen for the Field Notes Expedition Notebook

A while back I saw the Field Notes Expedition notebooks on Uncrate.com.  Immediately, I bought a pack of three straight from Field Notes.  They just seemed too excellent to pass up.  They're made with a synthetic paper that's water-proof, tear-proof, and from what I've seen on the internet lately, near indestructible.

After receiving my set in the mail I was ecstatic; I quickly ordered more fearing that they might sell out before I could build a decent reserve (they're still available).  I now have 12 notebooks in total and I imagine I'll be set for at least the coming year.

The trick, though, is, of course, the paper.  Most pens rely on paper being porous and absorbing ink, trapping pigments within the paper's fibers and facilitating that whole writing-without-too-much-annoying-smearing thing.  Typically, inks are water-based.  This, naturally, presents a problem when trying to write on water-proof paper.  The ink simply doesn't take; it doesn't dry and it smears forever (I tested some Noodler's bulletproof black weeks ago and it still smears today).  Pencil, naturally, is an excellent alternative.  But EDCing a pencil can be troublesome.  Traditional wooden pencils require sharpening and their point can quickly dull or break.  Most lead-holders carry the same disadvantages.  Higher-end, more durable mechanical pencils often feature slender lead sleeves at the tip that aren't retractable; a feature that can be rather irritating and can be quickly damaged in a pocket.  There are some great looking drafting pencils that fulfill all my requirements (the Rotring 800 comes to mind) but at nearly $90, I can't yet justify the expense.  Retractable-point pens seem to be the best choice, short of the fact that quite a few utilize water-based inks that simply won't work with the unique synthetic paper found in the Field Notes Expedition series.

Some standard ballpoints work relatively well (standard Parker refills, for example) but leave a bit to be desired, smearing quite a bit even after reasonable drying time.  Permanent markers also work, but I'm not a fan of carrying a Sharpie around; they're simply not well-rounded for other tasks.  The Sharpie Pen, a favorite of mine, is unfortunately (and expectantly) awful in this case.

By now I'm sure you're screaming "SPACE PEN" or something along those lines.  Yes, the Fisher Space Pen cartridge works relatively well with this paper.  It's still prone to smearing, but is not as awful as other pens.  Yes, Field Notes seems to market the Space Pen as the perfect companion to the Expedition's paper, but I'm not convinced.

The best pen for this paper that I've found thus far is the Uni-Ball Power Tank.  On a whim, I picked one up thinking that it might function well with the Expedition notebooks.  I opted for the "High Grade" series simply because of the slightly slimmer body, knurling, and aluminum construction; they just look better and that's something I value.  The High Grade comes in at $16.50 for the pen while the "Smart Series" is priced far lower at $3.30.  Both varieties use the same pressurized refill, so I imagine all varieties will function rather alike (the only difference being the High Grade refill's metal construction compared to the Smart Series' plastic construction).  I was quite pleased when it arrived and I put it to use, finding that it is, as I mentioned, the best pen I've found for the Expedition's paper. 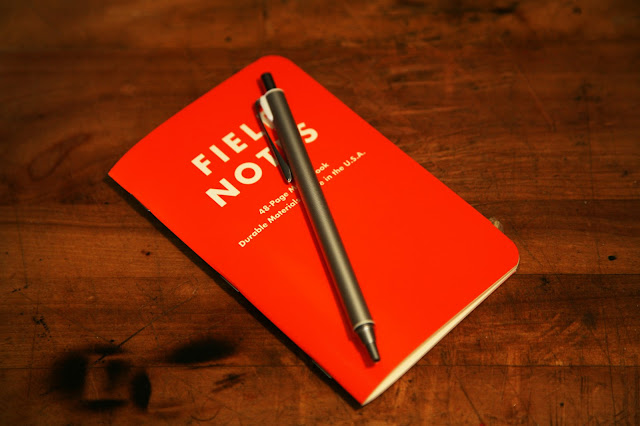 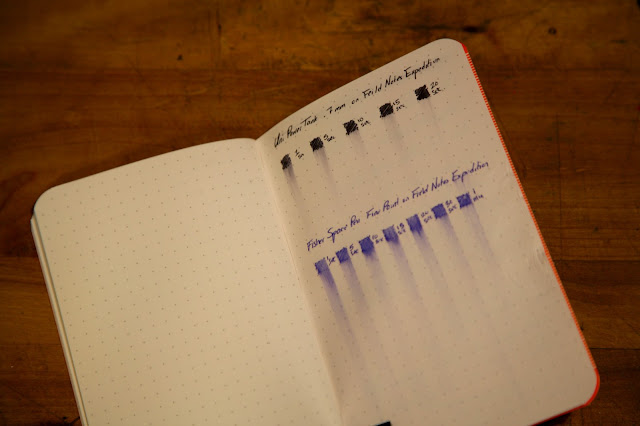 I almost feel compelled to pick up another couple of these, perhaps the cheaper versions, to throw in my car and have floating around for everyday use.  My only wish is that the High Grade came in a red barrel, although brown, black, and blue are rather compelling.

In short, the Uni-Ball Power Tank is the pen for the Field Notes Expedition notebooks.  It's stylish, reasonably priced (cheaper than most of Fisher's Space Pen products), and works exceptionally well with the synthetic paper.
Posted by Unknown at 1/25/2013